You will have the satisfaction to survive me and my comrades in misfortune. I do not hesitate to congratulate you on this personal triumph and the finesse with which you have accomplished it. You have gone to great expense in order to secure this success, for yourself and Great Britain. Should I believe you sufficiently naive as to consider this success anything more than a show, detrimental to the Great German Empire, a performance for the peoples and their Jewish and Bolshevist confederates which were maneuvered by you into the war, then my statement to you during the last hour of my life would also in the eyes of posterity be squandered upon an undeserving one.

My pride as a German and as one of the foremost responsible German leaders forbids me to lose even a single word in a dispute of world-historical importance on the disgraceful lowliness of the methods employed by the victors as far as these proceedings concern my own person.

However, as it is the obvious and announced intention of their administration of the law to throw the very German people into the abyss of illegality and to rob them once and for all of a future possibility to defend themselves by the removal of the responsible men of the National Socialist state, I have to add a few words to the historic subject of the verdict, premeditated by you and your allies.

I direct these remarks to you, since you are one of the best informed ones regarding the true underlying reasons for this war and the possibility of avoiding the same; in at least a manner bearable to the European future; and yet refused your testimony and your oath to your own high court of justice.

Therefore, I shall not fail, while there is still time, to call you before the tribunal of history and direct my statements to you, because I know that this tribunal will expose you some day as that man, who with ambition, intelligence and energy has thrown the fate of the European nations under the heels of foreign world powers.

In you I identify before history the man who had the ability to bring Adolf Hitler down and his political accomplishments; the man who will, however, be unable to raise the shield protectively against the invasion of Europe by the Asiatics.

It was your ambition to justify the Versailles Treaty regarding Germany. It will prove fatal to you that you succeeded. You personified the hardened obstinacy of your old gentry; and you also personified the stubbornness of its old age, opposing the last gigantic effort of the rejuvenated German power to decide the fate of Europe in the steppes of Asia in order to safeguard the same in the future. Long after my responsibility in the future development of events has found its objective judge, it will be put to your account that the past bloody war has not been the final one which had to be fought on the Continent for the very possibility of the existence of its nations.

You will have to answer for the fact that the bloody war of yesterday will be followed by a still greater one and that the European nations will not rule at the Volga, but at the Pyrenees mountains.

It is my fervent wish that you may at least live to see the day on which the world, and the western nations in particular, will become aware of the bitter truth that it was you and your friend Roosevelt who sold the future to Bolshevism for a cheap personal triumph over nationalistic Germany. This day may come sooner than you like, and you in spite of your advanced age, will be vigorous enough to see it dawn bloody red over the British Isles.

I am convinced that it will bring you all those unimaginable terrors which you escaped this time through the good luck of war; or through the abhorrence of the German conduct of war to a complete degeneration of the methods of fighting of peoples of the same Race. My knowledge regarding the kind and amount of arms and of projects from us, which - thanks to your military assistance to the Red Army - have fallen into their hands, enable me to form this supposition.

There is no doubt that you - according to your habit - soon will write good memoirs and you will write them the better, as there is nobody to hinder you to tell and suppress what you like.

You believe it very clever to have submitted this historic truth to the craftiness to a handful of ambitious junior lawyers in order to have it changed into an expedient dialectic treatise, in spite of your awareness as a Briton as well as a statesmen, that with such means the problems of existence of peoples could not be solved and judged; neither in the past nor in the future.

I have an only too well grounded opinion of your power and the cunning of your intelligence to credit you with believing the vulgar propaganda with which you motivated the war against us and with which you have had your victory over us glorified in a fantastic show.

I state here with great emphasis as one of the highest military, political and economic leaders of the Great German Empire the following: This war could not be avoided because the politics of Great Britain - under the influence of your person and of your friends of like opinions in all fields - persisted constantly to hinder the life interests and the most natural development of the German people; and - filled with the senile ambition to uphold the British hegemony - preferred the Second World War to an understanding, as we on our side had tried time and again to bring about, beneficial to both of the most prominent nations of Europe.

I declare herewith once more and most emphatically that the guilt of the German people in this war - into which they were forced by you - consists solely in trying to end the eternal difficulties to their national existence, which you artfully instigated and continued.

It would be useless to go with you into any dispute over the causes, the conditions of restraint and the motives which led during the course of the war to the political and military complications and which your lawyers knew so well to use in a one-sided manner at the cost of the National Socialist regime. The devastated regions of the European culture and robbed treasures give still today testimony of your embittered despair with which a great and proud people yesterday, with unparalleled readiness to make sacrifices fought for its existence. Tomorrow they will testify that alone the overpowering might, led by you in the field, was able to cause the subjection and deprivation of their rights. The day after tomorrow the Russians will bear witness to the betrayal, which surrendered Europe to the red Asiatics.

The Germany which you conquered will take revenge on you through its downfall. You have neither produced a better politic nor shown a greater courage than we. You have not won the victory due to better qualities or superiority of your strength or strategy, but merely after six years with the predominance of your allies. Do not believe your victory to be all that which you tell the world. You and your hand will soon harvest the fruits of your political art. What you as an experienced Cynic will not admit toward us - namely that our fight in the East was an act of urgent self-defense, and not alone for Germany but for all of Europe; and that the Germans fighting this war; which you constantly condemned, therefore was justified. This, your ally and friend of today, Stalin, will soon prove to you and the British Empire.

Then you will experience what it means to fight this enemy and you will learn that necessity knows no law; also that you can neither fight him successfully with treaties in law nor with the weight of Great Britain and her European dwarfs.

You have stated to the German people that you were primarily concerned with the restoration of their democratic mode of life. But you have not said a single word that you want to restore to them the sensible foundations of living, which have been denied to them these past 25 years. Your name stands under all essential documents of this epoch of British want of comprehension and jealousy towards Germany. Your name will also stand under the result with which this epoch of Germany's liquidation has challenged history in lieu of Europe's existence.

My belief in the vitality of my people cannot be shaken. They will be stronger and live longer than you. However, it distresses me to know that defenseless in your power, they now also belong to the luckless victims, who thanks to your success, do not approach a future of progressive work for the realization of their common aim, set forth by intelligence for the western peoples, but are driven towards the greatest catastrophe in their common history.

I do not wish to argue about outrages, which you rightly or wrongly ascribe to us and which neither agree with nor the German peoples comprehension; neither do I wish to talk about those atrocities which have been committed on your part and on the part of your allies towards millions of Germans; for I know that you have made under this pretext the entire German people the object of a collective outrage of a proportion never known in history. I also know that you would not have acted differently regarding your treatment of Germany without this pretence, because since 1914 you have striven for nothing less than the destruction of the German empire. This, your historic goal denies you the office of a judge over the avoidable and unavoidable consequences caused by your unremitting intentions and which were welcome to you as subsequent proof for the justification of your actions. Today I regret my and the National Socialist Government's greatest mistake, the fateful error to believe in your discernment as a statesman. I regret to have trusted you with justifiability recognizing the world-political necessity of a peaceful and progressive (prosperous) Germany for the existence of a flourishing England. I regret that our means did not suffice to convince you at the last moment that the liquidation of Germany would also be the beginning of the liquidation of Britain's world power. We began to act - each one according to his own law, I in line with the new one, for which this Europe was already too old - you holding on to the old one, for which this Europe is no longer anymore important enough in the world.

I shall know how to approach my end in the absolute conviction as a German National Socialist and considering everything else, to have been a better European than you. I leave the judgment of this with an easy mind to posterity. I hope sincerely that you will belong to this world for a long time to come as fate might grant you - as it has to me - when you decline to leave the posterity also a truth. 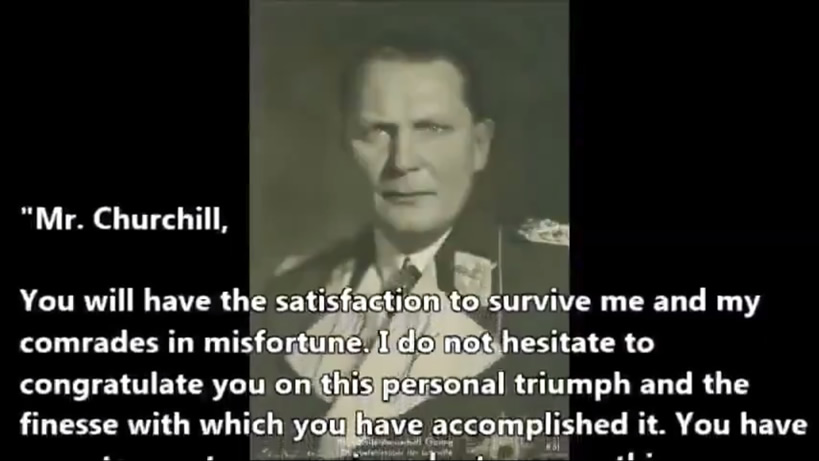 When working out outdoors during the warm season, two things are important: health and safety. I...