Watson discusses the Leo Frank Case in this January 1915 issue with new insights, energy, wit, sarcasm and vigor from his earlier introductions of the case in his Jeffersonian Newspaper (1914) issues on the affair.
The January issue is the first of five reviews of the case you must read. In Watson's later works on the the Leo M. Frank case he does a better job of articulating the Leo M. Frank murder confession than Hugh M. Dorsey and Frank Arthur Hooper do in the August and September issues, 1915.

Audiofile of John de Nugent reading the Thomas E. Watson Aug. 1915 article about 1) the murder of Mary Phagan, 2) the trial and various legal appeals made by Leo Max Frank, and 3) the protestations of his supposed innocence, of Georgia's "bigotry," "mob rule" and "antisemitism", and of a flawed trial and a guilty verdict "with no evidence" made by Leo Frank's Jewish and Gentile backer.

Publisher Tom Watson wrote this article right after the Aug.1915 hanging (conducted by the crème de la crème of the frustrated people of Georgia themselves after two years of spurious legal delays) of the pedophile, rapist, and murderer Leo Frank, a prominent Jewish official and businessman whom major Jewish-owned or influenced newspapers protested was a victim of antisemitism.
Watson defends the "lynching" (which carried out a death sentence supported by three juries and five levels of the court system) and goes beyond this to make his strongest statements yet about the bane of Jewish media sway over America. He also discusses two other famous cases of that day of supposed "antisemitism," the Captain Alfred Dreyfus case in France (regarding a Jewish officer convicted of espionage and treason) and the Menachem Beilis case in Ukraine/Russia (about a Jew convicted of ritually murdering and draining the blood from a little Slavic child).
This is the powerful post-lynching article about the Leo Frank murder case by Thomas E. Watson of Georgia, a crusading anti-Frank newspaper and magazine publisher, a former trial lawyer, state legislator, US Congressman and soon-to-be US Senator. Here Watson is again defending in his magazine the honor of his state, its legal system, and the fairness and evidence of the 1913 murder trial conducted by Judge Leonard Roan. But in addition he now also justifies the lynchers who had just hanged the CONVICTED MURDERER, high-ranking Jewish official, pedophile, serial adulterer, sexual harasser, sweatshop manager, and child-labor abuser Leo Max Frank on August 17, 1915. He also discusses the sensational 1906 Stanford White murder (a star American architect was killed by an enraged husband); the failed, unchivalrous attempt by King George IV of England to bend the law protecting his wife; the 1890s Jewish Dreyfus case in France; the then-recent (1911) Jewish Beiliss case in Russia (a Kiev, Ukraine ritual-murder trial); and Watson looks over then recent cases and charges Jewry with an unspoken policy: If a rich Jew murders a Gentile, or betrays his country (Dreyfus), then the legal system must not be allowed to punish him. 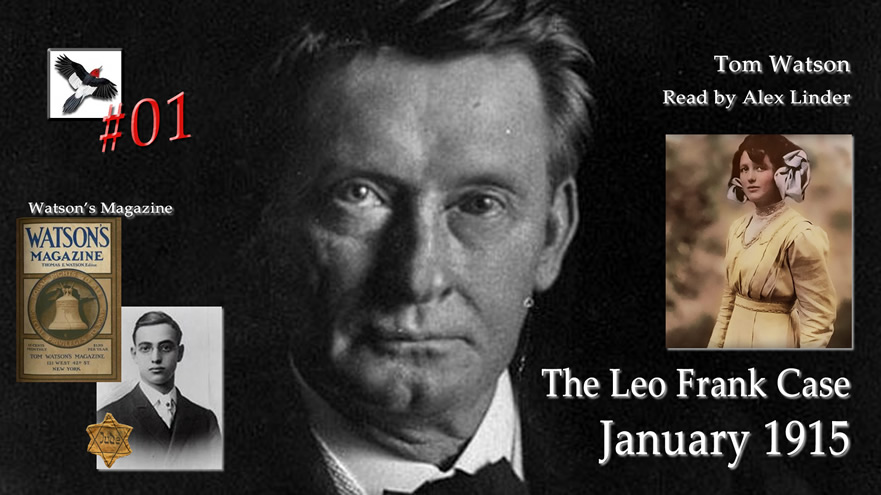